Academy
The Energy Crisis and Its Impact on Cryptocurrency Mining

The Energy Crisis and Its Impact on Cryptocurrency Mining

With the end of the Covid-19 pandemic, today's world is facing an energy crisis. While the wounds of the pandemic period have not yet healed, the war that broke out in Eastern Europe plays a major role in the deterioration of the global supply chain. Natural gas prices exceeded USD 3100 per 1000 cubic meters in mid-August, an increase of 610% compared to the same period last year. As a result of the rising cost of input fuels electricity prices in Europe rose by almost 300% in 2022 breaking a record. Governments are looking for ways to provide cheaper energy to their citizens as they struggle with high inflation which is the economic burden of the pandemic.

Central Banks, trying to solve the process that started with the Covid-19 epidemic with monetary expansion, are trying to find solutions to the problems caused by this monetary expansion. However, the way to reduce inflation rates, which have increased at record levels, is to increase production and reduce unemployment. Due to rising energy costs, the production sector is also being disrupted. Especially in the coming winter months, it is certain that there may be frequent power cuts in the European region.

While the world is in such an energy dilemma, how will cryptocurrency mining, which is the focus of discussions due to energy consumption, be affected by this situation?

Ethereum; With Merge, it switched the consensus mechanism from Proof of Work to Proof of Stake and ceased to be a cryptocurrency mining entity. With this transition, Ethereum 2.0 will reduce worldwide electricity consumption by 0.2%. Ethereum, which ranks second in the ecosystem in terms of market value has switched to an energy-friendly consensus mechanism but cryptocurrency mining is still one of the most important building blocks of the ecosystem. Miners directly contribute to the security and decentralization of the network by verifying transactions on blockchains to enable them to take place. These verifications are performed with high-power mining devices in the PoW (Proof of Work) consensus. 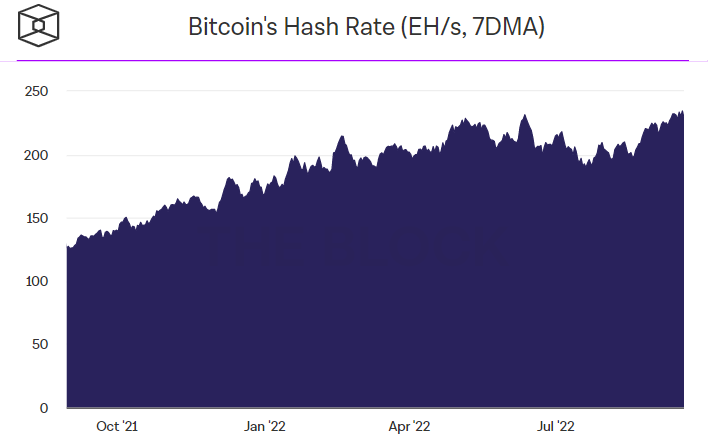 In the chart above, we see Bitcoin's Hash Rate in a 1-year period. The processing power in the network is expressed in Hash Rate. The more miners a crypto network has, the higher its Hash Rate will be. According to data from The Block, Bitcoin Hash Rate is at its highest levels in the past year. The reason for this rise may also be that Ethereum 2.0 and Ethereum miners turned to the Bitcoin network. 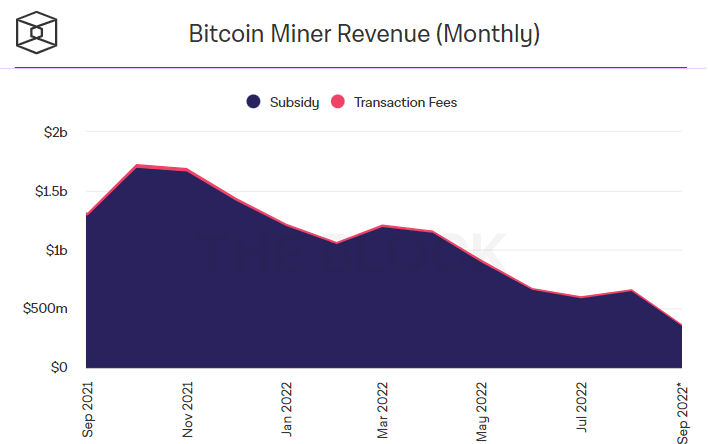 On the other hand, Bitcoin mining income is at its lowest level in the last 1 year. Considering the income level, the fact that the interest in mining on the network has not decreased is an indication that Ethereum miners have joined the network. We mentioned that the Proof of Work consensus mechanism is highly debated due to its energy consumption. So much so that the New York State government has passed a bill banning all Proof of Work-powered cryptocurrency mining facilities using carbon-based fuels for two years. However, existing mining firms or those in the process of renewing their licenses will be authorized to continue their operations. On the other hand, efforts are underway to accelerate the ecosystem's transition to green energy. El Salvador, which accepts Bitcoin as its national currency, announced that its miners have started to use a green energy source obtained from a volcanic region for their mining activities. Reducing energy consumption is at the top of the agenda of investors, who are a big part of the ecosystem. Finally, a solar-powered Bitcoin (BTC) mining facility has started operations in South Australia. Operated by Lumos Digital Mining, the facility provides about five megawatts of electricity for operation in an effort to reduce Bitcoin's carbon footprint.

Looking at energy consumption in the world, Bitcoin ranks 31st on a country basis. In January 2022, Bitcoin was ranked 23rd in this ranking. In an 8-month period, the amount of energy consumed by Bitcoin mining has decreased from 200 TWh to approximately 125 TWh.

Cryptocurrency ecosystem and blockchain technology are developing and developing positively day by day. The biggest example of this is changing the consensus mechanism while the Ethereum network continues to run. Energy consumption is one of the main topics studied in the cryptocurrency ecosystem, and as the ecosystem evolves, the energy crisis will inevitably be resolved. The energy crisis in the world is also a force that will trigger the acceleration of this solution.